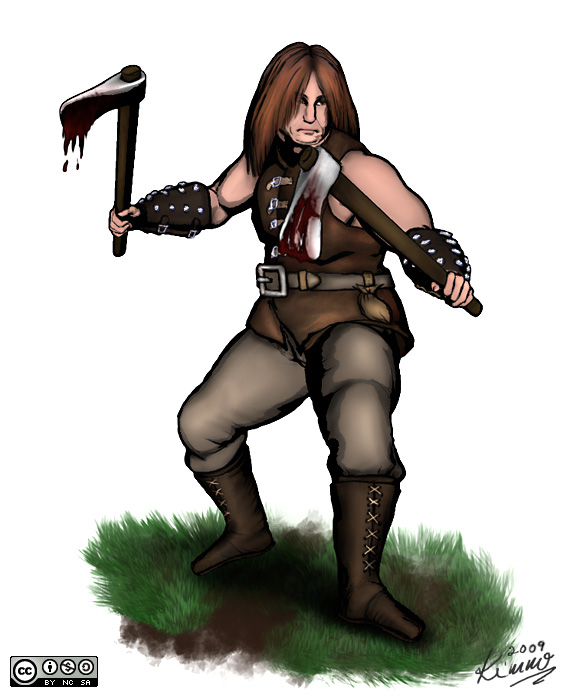 Birger comes from Argan. He is the eldest son of king Faegor Udgersson who has been the king of Argan for 40 years and counting. From his early childhood Birger was trained to become his father’s successor. His training included excessive combat training as well as other skills that a king would need. But things turned bleak on Birger when he turned 26. His younger brother Belgor Faegorsson had no intention to just bend over and allow Birger to become the next king. Instead he developed a complicated fake coup d’etat. The coup failed (as it was meant to according to Belgor’s plans) and fake trails pinpointed a totally innocent Birger as the mastermind behind the plan.
Faegor was lightly wounded, but his ego was badly bruised and frustration and disappointment led to anger. He ordered Birger to be summarily killed and promised a hefty reward to whomever brings him the head of Birger. Birger had gathered enough respect and friends during his teen years and so he managed to orchestrate an escape with the help of those loyal to him. 6 months later he sent a message addressed to his father claiming his innocence. It’s now been 3 years since his escape from the Argan and he has made up his mind to eventually prove his innocence to his father. He now takes bi-annual month-long reconnaissance journeys to Argan under disguise. He makes very shallow and quick contacts to his former friends within the kingdom but is in no position to tell which ones are actually still loyal to him. So far he has come to the conclusion that he was the victim of an orchestrated plan.

He stays close to Argan, but maintains a low profile. After he has managed to gather enough evidence, he plans to gather a small group of loyal friends and return to his father to either be embraced back into the community or executed on sight. He doesn’t actually need the money, but rather wants to keep up his skills from becoming rusty. So he has became a freelancer member of a mercenary group and has taken a semi-permanent residence in the city of Wessel in Gruenroth under the alias of Steawer Gorling.

Ever been to Gruenroth? No? Well it’s mostly deep, impenetrable and savage ancient forests dotted with marshlands, hills, isolated small villages and all this surrounded by regal mountain ranges. It’s pretty understandable then that travelling through the region is not the average man’s dream job.

Baerje is – however – not your average man. Standing at a hulking 7 feet exactly his massive height is only paralleled by his 170 kilograms of weight making him one giant of a man. However, Baerje is known among the Gruenroth people as the travelling gentle giant. He lives his life on a seemingly endless quest of travelling.

His giant looks also betray his actual purpose: he writes down legends, songs and local poetry in an effort to create the first ever compendium of Gruenroth’s folklore! Baerje has been circling around the country since his 17th birthday when his father had finished teaching Baerje the noble art of reading and writing.

Originating from the capital city of Gruenwald, Baerje is also friends with king Werner Baerwyn who endorses Baerje’s quest and has built a library in the capital city to house the folklore thus far gathered. The library has thousands and thousands of scrolls of folklore recorded by Baerje and there are now three full-time archivists copying the texts from scrolls to tomes in order to create comprehensive volumes of regional folklore.

As a man skilled with pen and paper, Baerje is also a competent woodsman and his outdoors skills are nothing to be scorned about. While not a warrior, Baerje is quite competent with his long axe and with his strength one hit from the axe is usually enough to lay rest any conflicts that may have arose. Although Baerje will not be the one starting conflicts, he damn sure is one to finish any.

Baerje is hearty, open, social and fluent with dozens of dialectics of the Gruenrothian language. His low booming voice easily bends into laughter and occasionally into singing as well. While not exactly a bard, he also manages his way around the traditional musical instruments of Gruenroth up to and including the Gruenroth’s signature flute made of birch.