A character illustration for the 1920’s era Call of the Cthulhu role-playing game setting. Perhaps his burly stature and experience in heavy lifting is needed by other investigators on their way to revealing ancient secrets or perhaps Big Mike has himself seen something he ought not to while unloading the barque Miskatonic after it’s recent explorational journey to the Antarctic.

Also part of my Through the Ages series of illustrations where a single character is depicted in several different settings. 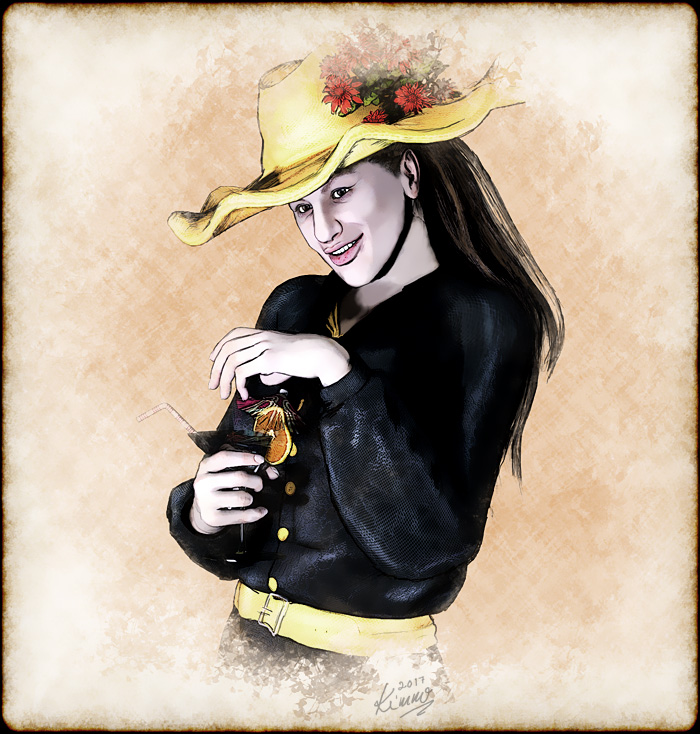 A character illustration for the Call of Cthulhu role-playing game setting. Also part of my Through the Ages series of illustrations.

Jebediah Herber and his 3 sons run a mid-sized farm located pretty much halfway between Kingsport and Arkham. The farm is accessible from the main road although one needs to travel a few miles west by small wagon trails not really suitable for motor vehicles. The farm consists of a dozen buildings three of which are built for human habitation, another three are for storage, one is a butchery, two are big hay barns and three are for livestock. The Herbers have some chickens and roosters, a few horses and lambs, a pack of dogs, a scattering of semi-wild cats and a retinue of goats and pigs.

The Herbers have been in voluntary isolation since the big storm that ravaged the area in 1910. They act aggressive towards any and all outsiders and even their immediate neighbors have accepted to shun them rather than remain in good terms. The neighboring farm folks tell tales of odd unearthly garbled and muffled roaring sounds coming from the general direction of the Herber place when the skies are clear and stars shine brightly. Some also suspect the Herbers have something to do with the occasional missing animals. It could be the wolves and bears, though.

Jebediah Herber, The Angry Farmer With Something Terrible To Hide by Kimmo Mäkinen is licensed under a Creative Commons Attribution 4.0 International License.

The wife to the filthy rich restaurant owner Robert Crawford, Susan has never had to worry about the things that ordinary people worry about – like money, standard of living or quality of food. The couple has been married for well over a decade now but they have not been blessed with children – something that continue to baffle the good townsfolk of Arkham City.

A regular visitor to pretty much any important(ish) social gathering, Susan also runs the Crawford Detective Agency from their own townhouse. The agency is nothing but a hobby to Susan – something to quench her thirst for puzzles, mysteries, the unknown and the occult. She takes only “weird” cases considering the mundane “photograph my cheating wife” -cases boring and not really interesting. Some cases have revolved around things that have drawn her further towards mysteries that seemingly point to a “world hidden from the plain eye” as she herself expresses things on her journal. She is verbally and literally quite talented and has written some details of her actual cases to be part of a series of short stories she has published in a fledgling literary magazine named Hidden that specializes in detective mysteries and weird fiction. 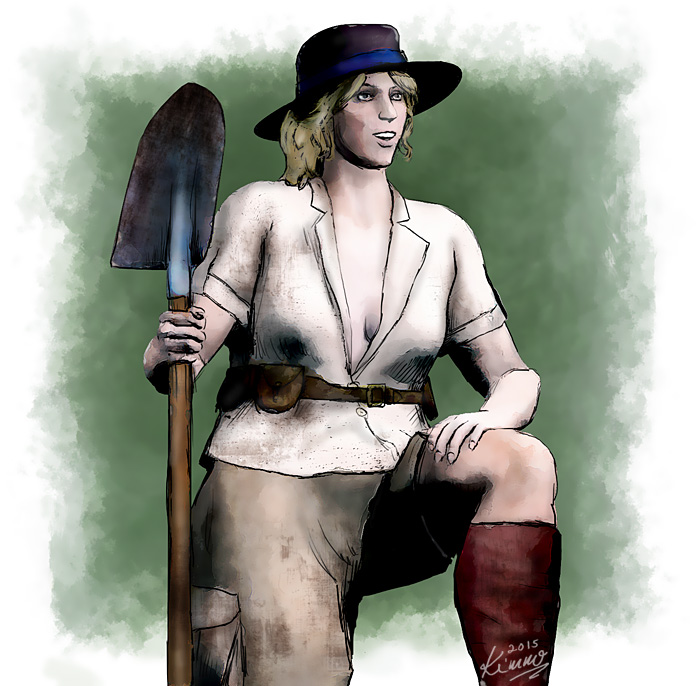 Amanda Halsey is a rugged hands-on self-educated amateur archaeologist. She has never had any real interest in the academic aspect of treasure hunting but has instead spent a good number of her 35-year life on excavations around the world. Her expertise in “getting things done” is well known throughout the smallish community of archaeologists and expedition planners. She spends 8-9 months each year on some excavation site or another and 3-4 months in Arkham where she resides in her vast family home situated on West Washington Road along with her 6 siblings and their offspring.

Amanda is a no-nonsense kind of woman and good friends with a colleague Ruth Meckler among others. Ruth and Amanda get along so well that they nowadays team up when going to excavations. Today Amanda works mostly as a Excavation Foreman – telling excavators where to dig, getting the right people to do various tasks on site and organizing … well everything. She never fears getting her own hands dirty and gets a seemingly endless supply of energy from coffee which she drinks pretty much all the time.

Miss Wade is a nation-wide celebrity due to her appearing in not one but three successful movies produced by Hollywood studios. She even performs a leading role in two of them. Currently she is “retired” … meaning that she has rejected movie parts offered to her recently, but probably jumps on the wagon if she is offered a “leading lady” role.

While in Arkham, she lives in 622 Brown Street in the so called Guardian Apartments complex occupying the most expensive 6-room loft apartment with her two maids and a butler. The location – while not the most wanted in town – is convenient for her since she spends long hours but a block away in the Manley Theatre premises (at 670 Gedney Street) where Arkham Amateur Theatre Company practises and performs. She both performs and teaches acting in the theatre company.

While somewhat flippant and flamboyant, miss Wade is also serious and passionate when it comes to acting and the performing arts. She has also mastered vocal talents in the form of mimicry and can deceptively easy mimic dozens of voices and accents as well as various natural sounds including common house pets and wild birds.

At the end of the day, however, she does like to party rough too. She knows her way around controlled substances and while not yet overly addicted, her relationship with alcohol is far from a healthy one – prohibition or not. Her presence is almost guaranteed whenever one of the important people in Arkham decides to throw a party.

Cassandra Wade, an Actress by Kimmo Mäkinen is licensed under a Creative Commons Attribution 4.0 International License.

A character illustration for Call of Cthulhu role-playing game setting.

Ruth Meckler travels the world on missions funded by the Miskatonic University in Arkham. She started out as a helping hand years ago and has rapidly risen to a respectable archaeologist and explorer mostly due to her work in professor Arthur Connor‘s numerous successful expeditions to the Amazon basin. Her academic work includes several important and revealing papers on ancient South American belief systems.  Her doctoral thesis – while still unfinished – is named “The Origins of Religion in Neolithic Amazonian Cultures as Evidenced by Archaeological Findings” and is already widely debated in academic circles even prior to it’s publication. 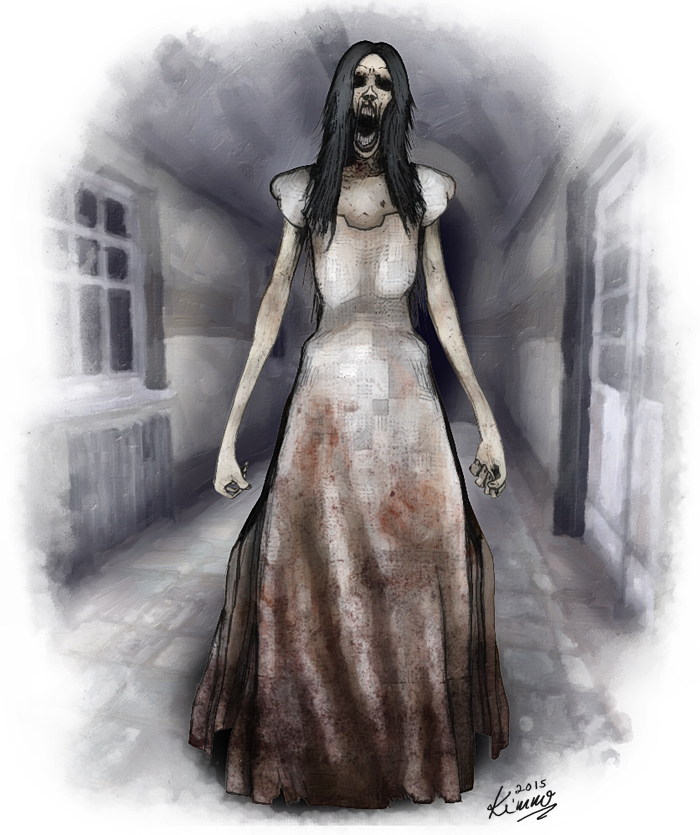 Oh the horror! This illustration is of a semi-corporeal ghost-like undead creature for Call of Cthulhu role-playing game setting. Sometimes intrepid investigators need to enter shunned or abandoned locations – such as derelict mental institutions waiting for their own demise – in hopes of securing some obscure tidbit of information. Sometimes the locations are not that abandoned after all.

The Wailer from Beyond by Kimmo Mäkinen is licensed under a Creative Commons Attribution 4.0 International License.

A creature illustration for Call of Cthulhu role-playing game setting.

An area named Valley of the White Stone just south of Arkham City is justly shunned by locals. The locals know that the wooded patches of the valley are home to unspeakable horrors that appear and disappear perhaps guided by the stars themselves. The woods are quiet and remote for years on end until something triggers the appearance of hideous tentacled monsters seemingly bursting through ground from hell itself.

The locals are wise enough not to build anything – not even wells for agricultural use – near the haunted spots. They avoid the locations based on ancestral knowledge. A traveler from Arkham can’t even get a guide to these locations even if the creatures have been seen last over a decade ago.

A character illustration for Call of Cthulhu role-playing game setting. I suppose this illustration works for either the 1920’s and modern version of the setting.

Jonathan Elmore is a private investigator by profession. He has been snooping the streets of Arkham for over a decade and have seen his fair share of things no man should see. Elmore works alone but occasionally accompanies a few trusted men particularly when the job at hand is expected to be out of the ordinary in some way or another.