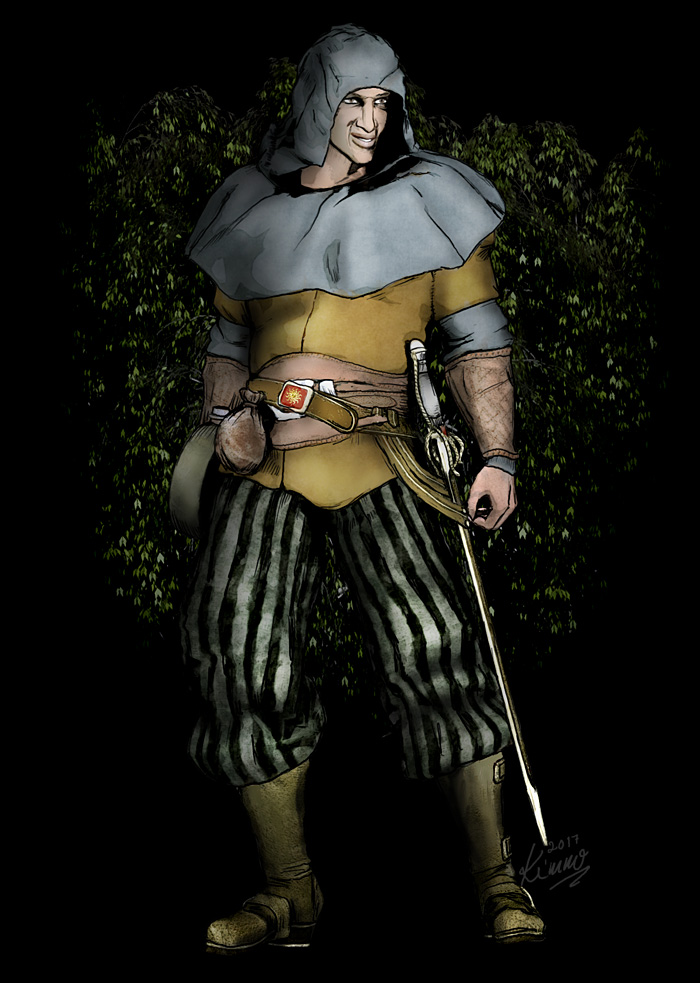 A character illustration for any fantasy-themed role-playing game setting.

Chapter Master Kembo Ree runs the infamous thief organization Sombra‘s operations in Witchlight Strand and is a close acquintance and a dear friend of Patricia Mael who heads the organization’s Akron operations. Kembo is of mixed descendance of a Ferrian father and a half-elf mother from Jaston in Witchlight Strand. He is thus well versed in the customs of both areas and this in turn has made his ascension to his current position much more easier as many Ferrian middle-men, couriers and mentors of the organization react well to anyone who show a familiarity with how the world works in Ferria.

His early life was that of continuous trouble: he was not a very popular as a youngster and rarely enjoyed the companionship of friends. Not that he was a particularly hard person to be friends with but his mother and father both worked beyond the allowances of laws and thus were persecuted by state officials and more shady characters forcing the family to both lay low or relocate ever so often. It was not uncommon for the family unit to flee into the mountains South-West of Lirio (in Gruenroth) for a month or to hide in the natural caverns acting as sewers under the city of Gaulle Sax in Witchlight Strand. And his elder brother Alecor Ree was much more favored by his father even to the point of neglecting Kembo. Alecor was the one their father had high hopes for and Alecor was the one their mother taught more submitting menial and demeaning tasks to Kembo.

Fast forward a few decades and now Alecor is the one rotting in a jail in Mayhill in Akron, their mother dead from a rivaling burglar’s accidental slingshot to the head and their ill father reduced to occasional purse-snatching and bread heists in the city of Bomert in Witchlight Strand. And Kembo is running the operations of one of the mightiest illegal organizations ever albeit his role is strictly limited to areas surrounding the city of Port Magalie.

This illustration is part of my Through the Ages series in which one character is illustrated in several different settings.

One thought on “Kembo Ree, A Rogue in the Night”