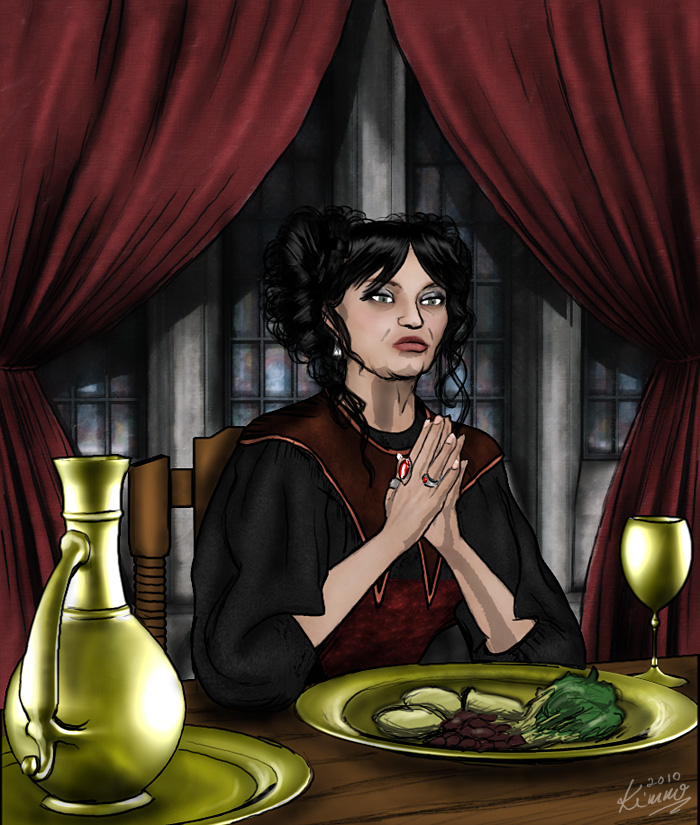 As Countess of Morton, Lady Sullivan holds one of the most important positions a woman can formally possess in Thrubmorton Fens or indeed even in the entire country for that matter. A wife to Count Ludwig Morton, The Crimson Knight, Lady Sullivan is naturally less famous than her husband but many people know that the countess actually holds much more power in her hands than the good count. It’s a common known fact that Lord Morton is a physical man – a man who enjoys the outdoors and getting his hands dirty doing all sorts of physical activities. Including taking part of common construction projects in the city, helping out a local merchant family fix their leaking roof or even rescuing a panicked, meowing cat from a tree.

Lady Sullivan is another matter. She believes that the nobility should actually rule instead of fraternizing with the common plebs. It’s a subject of frequent and heated discussions between the two and a resolution to this conflict does not seem likely until either one backs off on their stance. Countess Sullivan pretty much controls the common affairs needed to make the city function and prosper. She holds control over the civil servants of the city and even the city guard – just because Lord Morton gets easily bored if he’s ever needed to sit down for hours on end and listen to people complain about this and that and their grandmother. Of course if Lord Morton happens to say something to someone about anything really, his word will be final on the subject and everyone else – including his wife – backs off. It’s just a rare occurrence for Lord Morton to have an opinion on how the city should be managed and ran. Not that he doesn’t care, but his mind quickly begins to wander and his interest wane when the matters at hand are routine in nature. Lady Sullivan is the de facto ruler of the Morton family and by extension she pretty much rules the whole county.

Lady Sullivan is very aware of her status and many believe she to be arrogant and condescending because of this. Nevertheless she is careful with her words knowing that in politics the words are the weapons wielding the same power as swords in a battlefield. She does have extensive verbal talents. When she gets infuriated, the words she fires from her lips are continuous, blunt, harsh whippings and lashings that effectively slash the weak points of the recipient. Nobody likes to hear negative things about their shortcomings, weaknesses, looks, mental or physical defects or their lineage. She knows exactly where and when to strike should the need arise. And sometimes it indeed arise.

Currently 24 family members (some of which are just small children) of the Morton family live in the Morton Castle and they extend their power to all activities within the city and throughout the whole county although the family doesn’t enjoy much respect outside of their county as they are being perceived to be too southern in their ways. But their power in their own county is undisputed. Absolutely nothing can happen without the approval of some of the Morton family. The consistency of decision making is held up by Lady Sullivan. She has established a tradition of that forces all the members of the Morton clan together regularly to jointly feast and then to discuss urgent matters, general guidelines on how to rule and what’s happening and why. Roughly twice a week the dinner includes guests such as high-ranking civil servants, guild leaders, merchants, clergy or prominent artisans or some such folks of distinction, merit or otherwise of interest. The meaning behind this is to keep the ruling family “in the loop” of how the daily life goes on and whether or not the guests have any wishes or requests on how their line of business can be helped to function better. Of course many guests are not feeling comfortable enough to express their ideas and feelings candidly but those who dare say their piece often later find out it having a beneficial effect. But everyone also knows there is a fine line not to be crossed – the Mortons do not take kindly to propositions that would lessen the family’s hold (or squeeze, depending on whom one asks) on the affairs of the county.

One thought on “Countess Marla Sullivan”