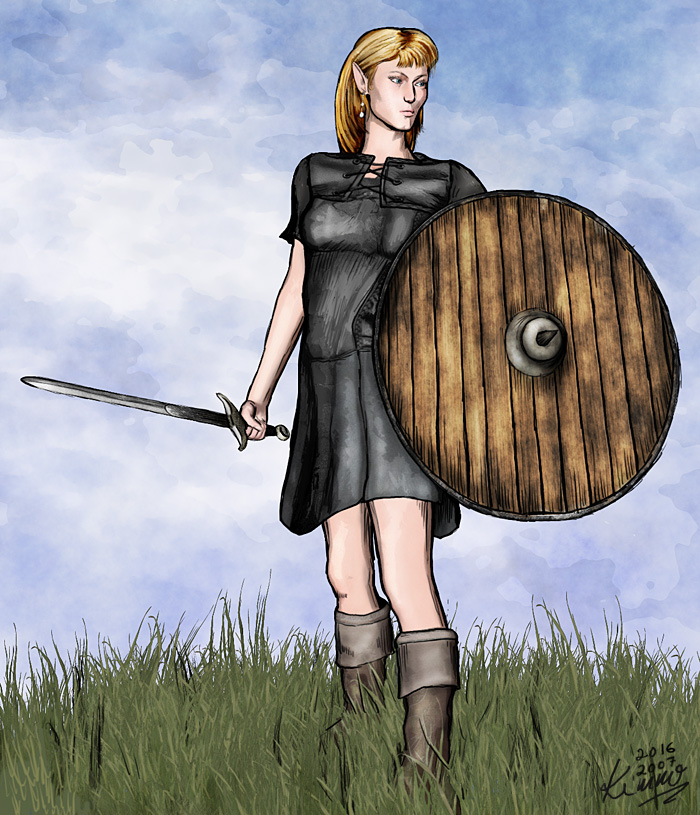 An illustration for any fantasy -themed role-playing game settings. This one I started in 2007 but for some reason never finished at that time and it has been sitting in a dusty old forgotten corner of my hard disc for years until I finished it this week.

Now a resident of the bustling port and capitol city of Witchlight Strand – Port Magalie – Zora has found living in the city unexpectedly delightful and quite contrary to what she was being told back in her traditional elven homestead some 50 kilometers up north from Port Magalie. While elven, her family has had dealings with humans from Gruenroth and her family tree reveals even a mixed marriage between her elven grandmother and a human from Gruenroth making her technically one quarter human. All this background has resulted in her adopting to human-centered city life quite easily.

She has the looks of a timid and lithe – albeit somewhat regal – little girl but in actuality she is resilient, determined and not at all blue blooded. An experienced forester and naturalist, her services as a guide are in high demand aided by her variety in language skills. She speaks all the elvish languages of the area, is fluent in Niesen (the main language spoken in Witchlight Strand), many southern dialects of Roth (spoken mostly in Gruenroth) and even manages basic sentences in Orcish due to her family homestead’s location being close to orc controlled bad lands.

Zora is open-minded and easily persuaded into adventures of some risk making her a tad naive. However, she has managed to keep herself out of harm’s way thus far by running fast and can live off the land without problem if need be. She currently accepts jobs as a guide to adventuring parties and commercial caravans seeking safe passage to Gruenroth. She knows of many routes that are safe from marauding orc bandits due to religious reasons (“Superstitious lot them orcs, they are!” is a favorite quote from Zora). While in the city, her services can be rented at The Wyvern’s Nest – a bustling inn right at the heart of Port Magalie – where she is a well known patron.