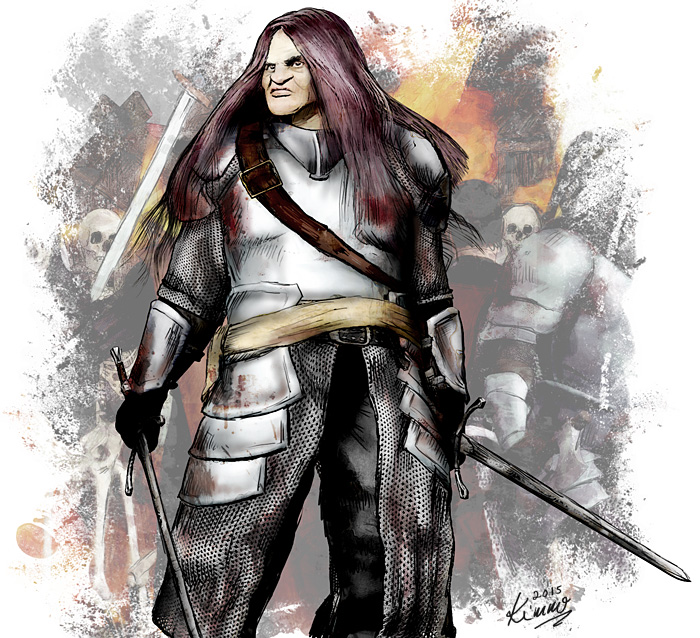 Formerly a leader of the mercenary group called The Eighteen Griffons, Sir Welyk Paize rose into fame after heroically saving the life of Lady Angelusia Wermander – the daughter to Lord Mortimer Wermander who is the high ambassador of Gruenroth to Groam and one of the chief counselors and a personal friend of the king of Groam. After that incident – which took place about 9 years ago – Sir Paize was recruited to the king’s guard but soon felt this new life was dull and uneventful and that life in the city with it’s comforts was for sissies and wimps. 8 years ago he was relieved of his guard duties and appointed to lead a newly formed military unit called The Emerald Unit. The unit is a first response group of stout warriors sent to deal with marauding undead creatures from the country of Zarnova. The unit operates in the border region of the two countries.

Sir Paize is a true warrior who lives and breathes action, adrenaline and combat. He does have a softer side to him in that he has a beautiful singing voice which he employs on still, cold nights after the duties of the day are over. Sir Paize leads his unit with a fervor and relentlessness but his men are hand picked by him and each and every man has had to prove their worth prior to being baptized in the unit. He enjoys the utmost respect among his men and his unit is well funded and supplied by the king himself who understands that all-out war with Zarnova is not in the best interests of the country but that still brutal force is required to send a message to the controllers of the intruding undead hordes.

Sir Paize is a skilled tactician and a logistical genius apart from being one of the best swordsmen in Groam to ever have existed. Little is known of his past and childhood but it’s needless to say his tough exterior started to grow at a young age.

He has an imposing figure of 190 cm and a rugged, weathered look in his face. His long reddish aubergine hair is a trademark of his and he usually wears his hair free-flowing.