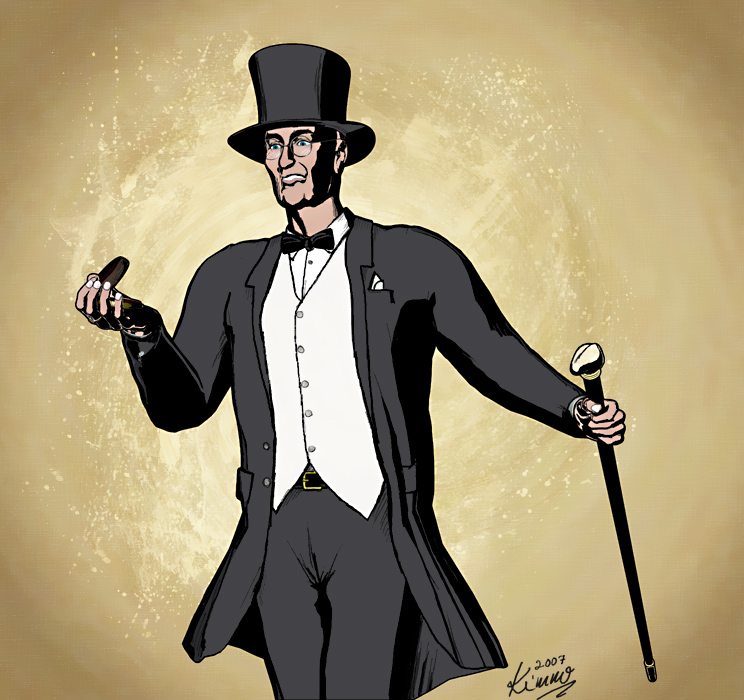 An illustration for Call of Cthulhu role.playing game setting. Specifically to the 1920’s era, but easily goes for the Gaslight period as well.

Mr. Bertil Kruenhoofer migrated to the United States from Austria and settled in the city of Arkham twenty years ago. He has loads of old world money behind him and while in America aristocracy is held in lesser regard than in Europe, his wealth on the other hand makes him “everybody’s friend“. Mingling with the crème de la crème of Arkham, Bertil is a well known player in the city’s higher circles. Bertil has no interest in politics and neither wants nor needs power (more than what wealth gives), but he has developed a curious interest in artifacts and certain antiquities of Egyptian, Mesopotamian, Babylonian and Chinese origin.

As a regular traveler to the mysterious other dimension of Dreamlands,  Bertil has picked up strange objects, languages and habits. He is not a man who would keenly announce his visits to a world beyond our realm of existence since he knows that being open about it will inevitably bring unwanted consequences. His favorite method to initiate his travel is to use a strange clock-like device that he bought in Boston from an insane antiquities dealer when his store’s contents was auctioned after he was committed to an asylum. Bertil is aware of other means as well – means involving Laudanum, means involving hypnotic suggestion and means involving blood sacrifice to strange and secret powers!