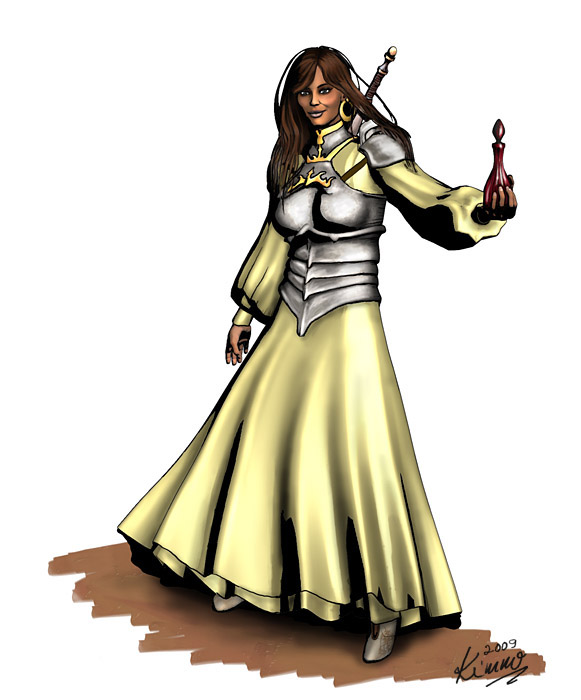 Khalida is one of three princesses (called mirhamesy; daughter of the mirhames) of Calishem. There are three princes (called mirhamo; son of the mirham) as well so the Calishem family is strong. Khalida is the third child of the current ruler of Calishem, Mirham Waru Calishem. She was raised in a free and rich atmosphere as were all the children in the family. Khalida has always had the option to pursue what she wants in her life and her family is always backing up her decisions – even if they break the convention of “regular” behavioural codes.

So she became a warrior princess. She trains swordsmanship, exotic poisons-use and herbal lore. Khalida is a common sight in leading expeditions of men to investigate disturbances reported throughout the country. She is fierce, temperamental and spicy, but she is well respected and honored among the Calishmen common people as well as the nobility of the country. Her heart is in the right place and she is generally thought as a very just and empathetic albeit a bit reckless and filled with youthful enthusiasm about the world in general. The regular citizens allow her some leeway and are mostly thinking that once she matures, she will settle down, find herself a husband and start expanding the might of the Calishems. As of yet she has shown no interest to such mundane and boring life. Instead she gallops around the country resolving small matters of injustice and learning the inner workings of the her ancestral country.

One thought on “Khalida Calishem”