There are so many so I’ve split this down a notch. 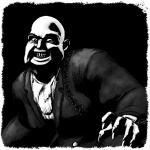 Illustrations in black and white reminiscent of the old style AD&D and others. I’ve also combined here a series of grey scale portrait illustrations of fantasy characters.

Own category for graphics usable with virtual tabletop gaming software such as Roll20. I’ve made a bunch in about a decade. Recently I’ve taken the habit to publishing series of nine tokens sharing a single theme, character or concept.

Herein lies a library of graphics resource images. They are meant to be used to enliven written material or as dividers to break text. Aimed for writers of fantasy-themed role-playing game scenarios of adventurers but I suppose they might find other uses as well.

A growing collection of fantasy-themed character illustrations. These are meant to help players visualize their character and as a long time role-playing gaming enthusiast and game master this is by far the biggest sub section.

Another growing collection of fantasy-themed character illustrations but limited to upper body portraits as opposed to full body depictions of characters. Sometimes, for example when it comes to meeting non-player characters in a non-combat situation, players just want to get quick feel of the character’s looks.

Everyone lives somewhere! Even the villains and monsters of stories. And many times it is simply just easiest to present an overall picture of the location than try to describe the environment. Oh and I’ve got some simple maps as well.